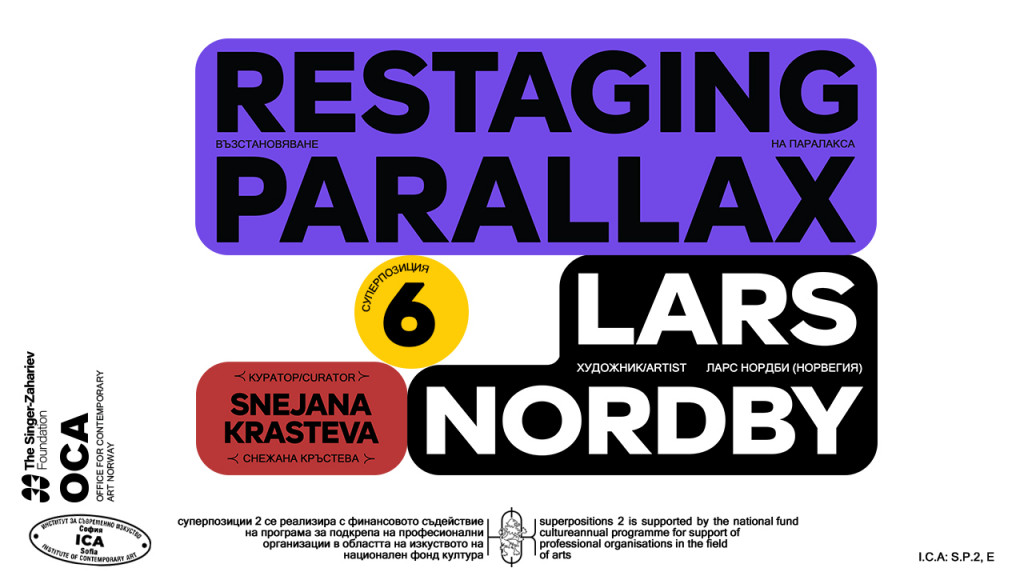 Deceptively minimalistic, Restaging Parallax is, in a way, the first retrospective of the Norwegian artist Lars Nordby (b. 1988, lives and works between Norway and Bulgaria). The eponymous installation on view presents three performative works produced by the artist between 2016 and 2018. They are restaged at the ICA-Sofia Gallery space through various elements such as fake walls, insecticidal UV lights and the medium of theatricality itself. Using the latter to explore complex mechanisms of ideological constructs, Nordby often transforms daily objects into theatrical props in order to create situations while activating in the viewer a certain “parallax gaze”– an ability to immerse ourselves in the mind’s’ blind spots. This ability can, in turn, serve as a powerful tool for the beholder to enact (political) resistance.

The concept of theatricality as a critical term opens up a range of useful reflections on subjects such as realism vs. illusion, authenticity, artifice, manipulation, agency and liberation, as well as on less evident concepts around identification and its constructs– a theme that Nordby consistently explores in his art practice. In The Abstract Frontline of Identity (2018), one of three works that are referenced in this exhibition, the artist uses rats and fruit flies’ natural attraction towards certain smells and light while, placing glue traps and UV lamps to lure them into their death. While we stand in wait for them to make an appearance dreading the projected moment of their end, we are momentarily oblivious to the mechanisms at play. The choice of ‘actors’ is key here––animals have long been used in literature and art to expose human artifice. Yet the rats and flies’ (premeditated) failure to attend the exhibition makes palpable instead a strong sense of staged expectations that awkwardly coincides, even for a brief moment, with part of what allegedly defines their very ‘animal’ authenticity: the magnetism inherent in their nature, a lure that eventually kills. A similar situation is enacted in an earlier work by Lars Nordby People behind the Gallery Wall (2016), whereby the artist built a fake wall in the exhibition space and, through merely the exhibition title, stated that there were people behind it. If historically animals were often deprived of agency in their authenticity, here, the human actors and their agency seem to be all there is. Whether we identify with any truth in the words (which we are ultimately denied access to) is where our agency lies, yet inevitably succumbing to the lure of aligning ourselves with the truth at a given moment is what drives us to the wall, to that thin frontline of identity the artist is exploring throughout his works. In the installation Overidentification (2016) Nordby repurposed OSB panels that were used to board up broken windows in the aftermath of the tragic terrorist attack in 2011 to board up the windows of the art institute Kunstnernes Hus in Oslo, weaving into the intimate identity-formative processes wider historical events and collective memory. From animal or human ‘actors’, the artist’s attention turns to the objects' carriers of memories of defining grieves in order to explore the very possibility of a ‘parallax gaze’, of becoming aware of what eludes us when we are left with only one perspective.

Restaging Parallax at ICA-Sofia Gallery is thus a small retrospective of the tactics and strategies employed by Lars Nordby rather than a straightforward chronological staging of past works. A wall of 30 bug zappers, dangerously charged with their usual voltage, divides the gallery space in half, leaving the space behind the lamps visible yet inaccessible and dysfunctional. In this final act, humans, animals and objects are united in the ultra-violent ‘promise’ of artifice and machinations. As Nordby describes it and hopefully we can see it too - “it’s a functional tendency of ideology today.”

'Restaging Parallax' is the sixth exhibition in the year-long program Superpositions 2 / Entanglement, 2022 of the Institute of Contemporary Art-Sofia. The program includes six exhibitions, each one a collaboration between an artist and a curator, along with a cycle of educational events and discussions. All these examine the entanglement of contemporary art with politics, science and technology, popular culture, gender and social movements, ecology and migration. The program is supported by the National Fund “Culture” / The Annual Program for Support of Professional Organizations in the Field of Arts and the Singer-Zahariev Foundation.

The exhibition is supported by OCA – Office of Contemporary Art in Norway.

Lars Nordby (b.1988, Norway) lives and works in Hamar, Norway, and Veliko Turnovo, Bulgaria. Nordby holds an MFA at the Oslo National Academy of Arts in Norway (2016). His artistic practice evolves around photography, performance, and art installations. Referring often to theater aesthetics and the theatricalities of everyday life, Nordby deals with human obsessiveness to identity and ideological belonging. Solo exhibitions include White Card Wardrobe Plot at Gallery Reneenee in Amsterdam, the Netherlands (2021); Zinc White Lard at Galleri Sol in Bornholm, Denmark (2021); Dubious Chalk Circle at the Archeological Museum in Veliko Turnovo, Bulgaria (2019); Old Laughter and Synonyms for Actors at Rafael Mihaylov in Veliko Turnovo, Bulgaria (2018); Tango, or Echoes of Conditional Self-Assertion at Kunstnernes Hus in Oslo, Norway (2016); Dear Hilesh at Chicago Art Department, in Chicago, USA (2015); and To Tole at Poznan Biennale in Poznan, Poland (2015).

Snejana Krasteva (b.1979, Bulgaria) is Chief Curator at Luminous Art Foundation and co-founder and Artistic Director of the Triennale of Contemporary Art from the Eastern Balkans to take place in Bulgaria in 2024, and until recently was Senior Curator of the Garage Museum of Contemporary Art (Moscow). Krasteva received her BA in Chinese studies from the University of Nanjing, China in 2004 and her MFA in Curatorial studies from Goldsmiths College, London, in 2011.

After moving to Beijing in 2004, she directed the Beijing-Tokyo Art Projects Gallery, where she held exhibitions such as WAZA KUYA (2007), Is It OK to Have Fun in an Art Gallery? (2007), Techno-Orientalism (2005) and Japanimation (2006), and organized China's first exhibition of the Japanese group Mono-ha called "What is Mono-ha" (2007). Since 2007, she has worked at the Ullens Center for Contemporary Art (Beijing), where she has helped stage a number of exhibitions, including solo and group exhibitions by young Chinese artists and important retrospectives such as Yan Pei-Ming's Landscapes of Childhood (2009). Since 2011, she has worked as a curator at London's Art in the Underground art centre, where she has implemented a series of public projects.

She joined the Garage team in 2013 and is involved in the implementation of large-scale exhibition projects. Among the most recent are the exhibitions Spirit Labor: Duration, Difficulty and Affect (2021); The Coming World: Ecology as the New Politics (2019). Krasteva has curated solo projects with artists Rodney Graham (2021), Allora & Calzadilla (2019), Viacheslav Koleichuk (2018), Urs Fischer, Yin Xiuzhen (both 2016), Erik Bulatov, Katharina Grosse (both 2015). In 2017 she was the co-curator of the 1st Triennial of Russian Contemporary Art, and co-curator of the exhibition The Other Trans-Atlantic. Kinetic and Op Art in Eastern Europe and Latin America 1950s – 1970s (2018); Grammar of Freedom / Five Lessons (2015), the first major exhibition of Eastern European art in Moscow. Krasteva was also one of the organizers of the first international conference Performance: Ethics in Action (2013) and the 6th conference What time do we live in? New historicity and the politics of time (2019). From 2018 to July 2019 she was the curator of the Garage Studio & Residency programme. From 2016 to 2019 she taught the course Exhibition History at the RANEPA. Since 2020, she is a teacher of the course Exhibition Making as part of the HSE and Garage Museum of Contemporary Art joint master's program in Curatorial practice.