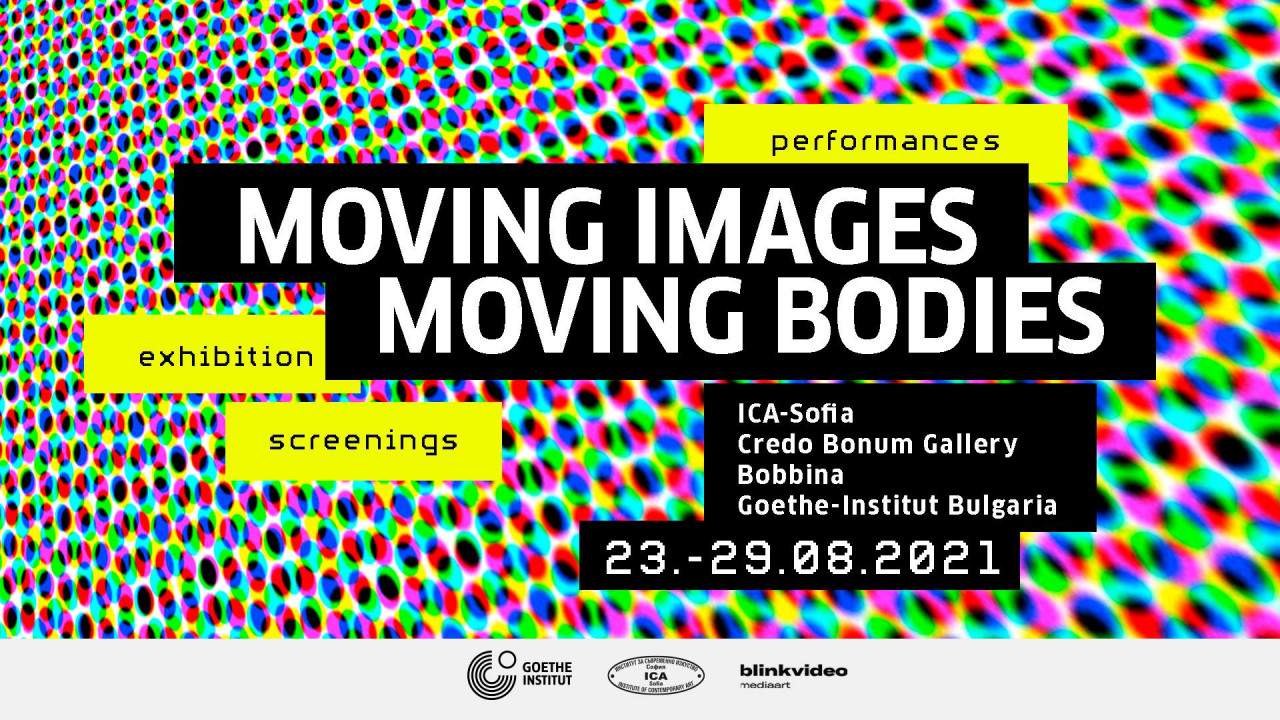 Video, art films, performances and meetings with artists from Germany and Bulgaria

Moving Images Moving Bodies started as an exhibition project of the Goethe-Institut Bulgaria, aiming to present video art from Bulgaria and Germany. The unusual year of 2020 changed the plans, but instead of thwarting it, it allowed the project to grow and develop. After two curatorial selections by Ludwig Seyfarth, Kalin Serapionov and Krassimir Terziev with films by nearly 20 authors, a "video art week" with an exhibition at three locations, performances, meetings and evening screenings is now forthcoming.

Between August 23 and August 29, the Institute of Contemporary Art - Sofia, Credo Bonum Gallery and the independent space Bobbina will host an exhibition featuring authors Boryana Petkova, Dimitar Solakov, Evamaria Schaller, Kamen Stoyanov, Kirstin Burckhardt, Mina Minov, Nadezhda Oleg Lyahova, Sevda Semer, Stella Geppert und Teboho Edkins. At each of the locations there will be a performance and talks with the participating artists.

At the same time, evening screenings of Bulgarian art films will take place at the Goethe-Institut Bulgaria, and the exhibition "Becoming a Figure" by Veneta Androva and Peter Odinzov will be seen as an accompanying event.

Video art began to develop when the first portable video camera appeared on the US market in 1967. Along with technical experiments, theatrical performances are also documented, which, like ordinary physical performances, are often held only to be recorded. In the beginning, Bulgarian video art was also strongly influenced by performance and the study of the human body, although here too the line between documentation and independent video art is often mimicked.

Today, technical opportunities, including those for digital manipulation, have expanded endlessly and are available where previously political boundaries have created differences in technological status. The topic of the human body, also related to the study of interpersonal relationships, is still the main focus of video art or the art of working with moving images. Examples from the current cultural scene in Bulgaria and Germany show this.

MORE ABOUT THE PROGRAM

The video InsideT (collective) and the solo performance InsideT - Learning from the Body by Stella Geppert are dedicated to the transforming qualities of the body and the intergenerational archives it preserves. A base component of the work is a type of clothing that emphasizes the aspects of the somatic fulcrums in the body and emphasizes its movement and posture. Between the traumatically induced moments of bodily dissolution and the liberating territorial empowerment, the movements of the body fit vigorously into space like huge drawings.

The gestures of everyday life are transferred to the exhibition space. These daily actions take on new forms through gesture-physical actions. The movement to and through the architectural landscape and the audience becomes an interaction. This ephemeral encounter in space develops and plays out according to the specific place.

"I call a friend in the middle of the night, I'm not sure if I'm having a panic attack, or I'm experiencing my first Covid symptoms, I'm out of breath ..."

In the performance "Pan (dem) ic attack", two artists who have not seen each other before, but have talked in the last year, meet for the first time now, trying to give a clear form to their experience.

Teboho Edkins is filming in criminal circles in Cape Town, in a prison with cattle thieves in Lesotho or in African communities in China. In this context, excerpts from his films will be shown, which have something to report on these topics. Another focus of the discussion will be how Edkins' documentary and artistic approach takes him more and more from the film scene to the art scene.

The project is organized by Goethe-Institut Bulgaria and the Institute of Contemporary Art - Sofia.