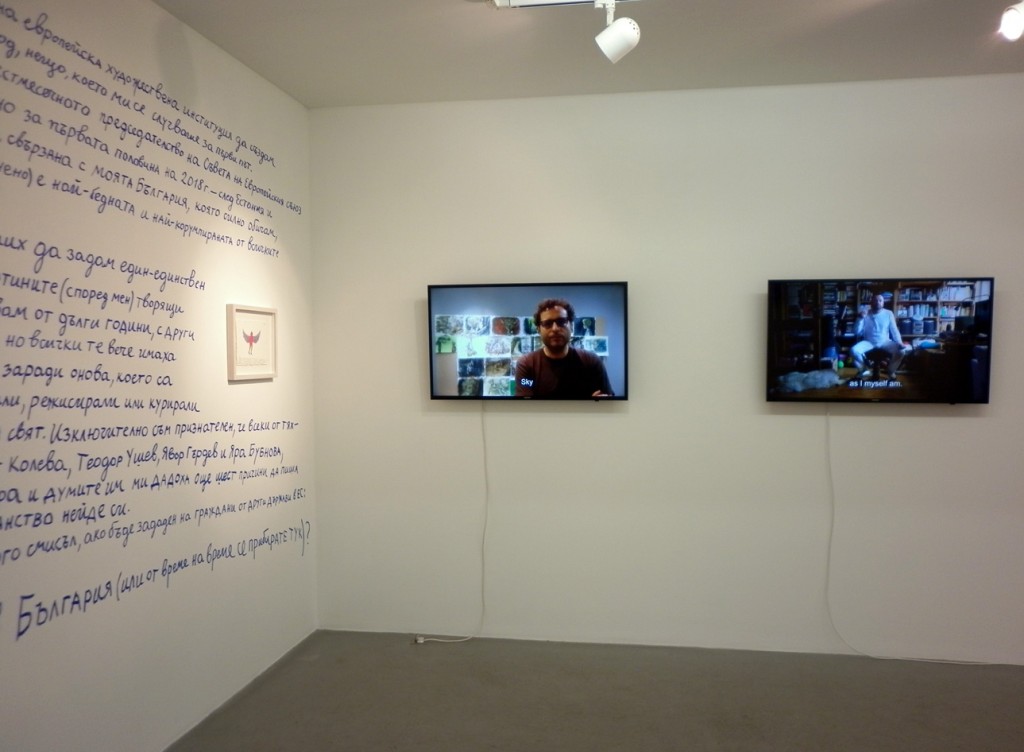 Nedko Solakov created his video installation “Some Bulgarians” (2018) under circumstances that are not typical for him. After a long wait for proposals from Bulgaria to present its contemporary art in Brussels, and in relation to the country holding the rotating Presidency of the Council of the EU, the traditional host of such prestigious events – the BOZAR Center for Fine Arts – decided to address Nedko Solakov directly and to commission him to make a special project dedicated to his country.
Traditionally the commissioning of art projects representing one or another country in the BOZAR exhibition halls is left to those countries themselves

The video installation was presented in Brussels to great success for a period of four months from January 31 to May 30. “Some Bulgarians” was shown in the Horta Hall where on February 1 of this year, the Cultural Program of the Bulgarian Presidency was officially inaugurated in the presence of our president and prime minister, as well as other ministers and heads of cultural institutions. In his welcoming address Paul Dujardin, the director of BOZAR, emphasized that Nedko Solakov’s work reflected on Bulgaria in its contemporary relations to Europe.
Famous throughout the art world as a story teller using a variety of artistic means – from painting and drawing to complex multimedia installations – this time Nedko Solakov invited real contemporaries into his story about Bulgaria – Georgi Gospodinov, Iara Boubnova, Ivo Dimchev, Javor Gardev, Ruth Koleva and Theodore Ushev. These are six artists with extraordinary international careers, recognized even at home, to whom Nedko Solakov is openly partial. In his words: “some of them I have known for many years, others I met in person because of this project, but all of them already had a place in my mind and heart because of what they have written, performed, sung, animated, staged and curated not only in Bulgaria but all over the world.”
Nedko Solakov turned to these fellow-citizens specifically in the context of the often repeated, both here and abroad, negative characterization of our country “which is arguably the poorest and most corrupt of all the 28 European member-states”. He asked them to explain in short monologues their relation to Bulgaria.
All of them, sometimes at length, sometimes in brief, ironically, emotionally, and occasionally as if off-the-cuff, are responding for the camera to one seemingly simple question asked by the author: “Why do you live in Bulgaria (or go back there from time to time)?”
Unlike the presentation in Brussels, the Sofia showing, which is purposely opening on the last day of the Bulgarian Presidency of the Council of the EU, also features six watercolors. These are the part in the “dialogue” played by Nedko Solakov himself. Using one of his preferred artistic formats – metaphorical drawings with stories especially imagined for each participant in his project – the drawings are being shown for the first time. They are not only a form of gratitude for the spontaneity and the openness of “some Bulgarians” but also a very personal “declaration of love” on the part of the internationally successful and prize-winning fellow artist.