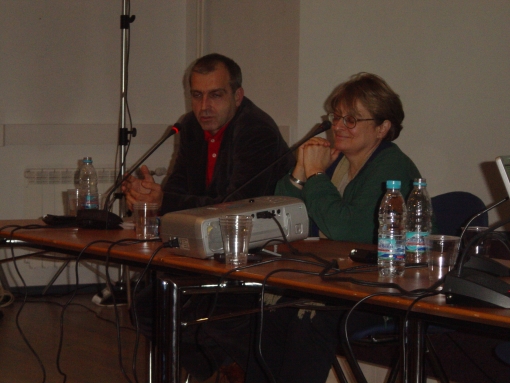 A twofold terminological apparition has been stalking in the life of Bulgarian society for the last decade. This same apparition is constantly present at the debates organized by the Visual seminar project as well. Being a symptom both of the opening and democratization of this society, and of its attempts to cope with the increasing dynamics of the country's integration into a globalizing world, this apparition is a terminological, conceptually substantive and linguistic problem. The pair of English words in question is 'public' and 'private', terms that have become part of contemporary life, and yet neither of them seems to have been allocated an adequate rendition in Bulgarian. Probably the whole range of ideas and practices that we try to cover when using this pair is still a 'hot area' of self-reflection that is more or less cognitively realised in our society. Probably we have not reached the required minimum of experience and expertise that will afford the formation of a stable consensus on the use of the terms. Probably our society is going through a process, among many other processes, of exploring its own thresholds of tolerance or, more precisely, of the boundaries between the above two spheres in the life of the individual and the community. Discussing all these issues is what the forthcoming Visual seminar debate aims at.

Previous debates in the context of the Visual seminar have shown that the use of 'public' often refers to either 'state-owned' or 'urban', but rarely to 'communal' especially when used with regard to the city. At the same time, there is serious hesitation about 'private' - does it mean 'privately owned' or 'personal'? By the way, in Bulgarian as well as in other Slavonic languages there is no exact equivalent of the English word 'privacy' implying, for example, the right to a certain inviolability of the person, a sense of personal space in terms of one's life and property. But this is a problem of a different order. The range of issues that we put forward for this debate are: Where does the boundary of tolerance lie? What is acceptable and what is unacceptable within 'communal' space from the point of view of 'private' interest, and vice versa? Where does the boundary lie between the communal and the private, or between the public and the personal? How is it defined and by whom? What are the conditions of 'entry' when crossing this boundary? The risks and challenges? The sanctions? The regulation? Are these possible, from what kind of positions and with what mandate?

Of course, the Visual seminar project focuses mostly on the city and on the life of the community of city-dwellers in it. However, this is not its only focal point. Through advertising and billboards the private interest emerges on the square only to encounter another private interest that has the right to react. Recently, the 'public' interest, however manipulated it might be to fit the purposes of the entertainment industry, entered the 'personal' sphere of 12 'volunteers' for fame ... But what would happen if the Big Brother reality show was transmitted not only through cable television to the TV at home, but also to a giant screen above Slaveykov square? And what would happen if several families living on the ground floor in Rakovsky street decided to put a camera in each bedroom and to transmit the signal to a monitor placed on the window overlooking the street? Is public space in the city everything that is subject to selling and buying? Or is it the space where an individual finds himself or herself not because of their personal choice but because by necessity he or she is part of a human community? Does this necessity grant the right - and the obligation - to have a personal opinion, to express it, to act in order to defend it?

As moderator of this debate I would identify three types of actions and positions that have taken place and have registered with the public in whatever way, or have been formulated during the working process of the Visual Seminar. It's impossible to describe these in detail here; still for the sake of clarity I will formulate them as follows:

A/ visual anarcho-pacifism - public space in Sofia provides an environment for an aggressive clash of personal interests, which life and time will lead to a state of self-regulation /the statement of Yavor Gurdev during the VS debate in October 2003; my action "Stefan's Brigade", 2003/. Another term here could be "visual populism" or even "visual realism";

B/ visual machismo - until this sphere is regulated power acts will be undertaken to defend the interest of the community from the position of a personal point of view, whose self-appointed appropriation of power is possible but problematic /the authoritarian action Gen. Borisov vs. Azis/. Although forming such set of regulations is a problem that is intricate and even impossible to resolve, there is still an alternative - "visual activism", which upholds that visual politics in public space is a result of debate, fights and political pressure;

C/ visual legalism - the law stands above everything and even if there are no special clauses concerning this sphere (and these may never come into being), extrapolation is necessary so that the legal provisions in the existing legislation, including the constitution of the country, can be applied in order to guarantee the equality of private interests in public space /Alexander Kiossev's commentary "Hexameter and Admonition", Sega Daily, 09.10.2004; on the Gen. Borisov vs. Azis case; Pavel Popov's commentary on the "Citizens for Green Sofia" initiative, Kultura Weekly, 22.10.2004/.

The Forum of Visual Culture is the public forum for debate on a particular agenda, serving the circle of the Visual Seminar, specially invited participants (intellectuals, academics, artists, journalists). Its meetings are also intended to involve the media and the public. The themes of the public meetings are suggested and discussed ahead of time by the Experts' Unit of the Visual Seminar. The Experts' Unit is composed of artists and intellectuals sharing the priorities and concerns of the project, but representing various viewpoints and professional interests, who are capable of uniting those in a common debate as well as awarding the debate with a challenging and inspiring profile. The main function of the Experts' Unit is through closed discussions and brainstorming sessions to define the hot points of our contemporary visual culture.

The Forum of Visual Culture has three specific and interrelated foci:

A specific sub-module of the Forum of Visual Culture is the exhibition project “Red Riviera Revisited” that will involve the outsiders’ perspective on the chang(ed)ing visual interface of the country by mainly German and other artist who had been to the Bulgarian Black Sea coast (the Red Riviera) before 1989 as vacationing youngsters.