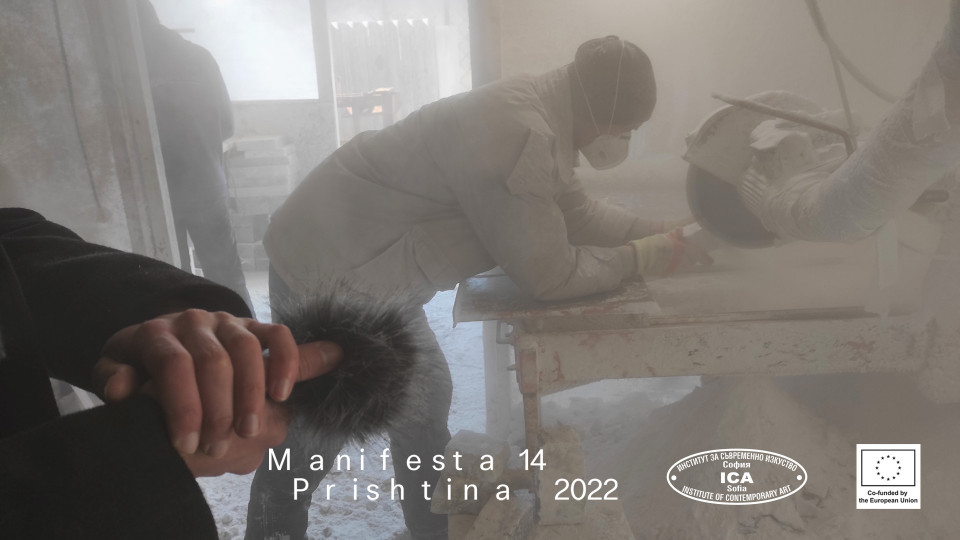 Institute of Contemporary Art - Sofia is pleased to be a partner in the Manifesta 14 Western Balkans Project: Co-Producing Common Space and Shaping Formations of Solidarity in the Western Balkans and beyond, co-funded by the European Union.

As part of the evolving, multidimensional, across borders activities within the whole project, the Institute of Contemporary Art – Sofia will be organizing events both in Sofia and in Prishtina. Loosely described as “visual talks”, these will encompass theoretical, visual and critical “voices”, off and on-line contributions, panel discussions and exhibition displays by a multitude of contributors from the region and beyond.

Curator/Expert: Kateryna Filyuk
Lecture/Talk: The Salt of the Earth or How I Have Never Been to Soledar
Project: Manifesta 14 / Western Balkans Project / Expert Talks

This is the first of four Expert Talks to be held under the general title “Curating the End-Game: Pain, Guilt and Empathy”. The talks are organized in the summer months of 2022 by the Institute of Contemporary Art - Sofia as a partner in the Western Balkans Project of Manifesta 14, the nomadic biennial of contemporary art which is held in Prishtina, Kosovo (July 22 – October 30, 2022).

In the synopsis for the first talk in the series, Kateryna Filyuk says: “Invited to share a story, I’d like to talk the audience through my journey to Soledar, a city in Eastern Ukraine, where I’ve never been. However, I spent the last three years of my professional life researching on this place, developing projects there and most importantly getting to know the amazing people, who live in a small company town called Soledar (the one that gives salt, literally). It was chosen by IZOLYATSIA as its new headquarter precisely due to the town’s proximity to the frontline, its challenging industrial past and present, and a distinguished geological and bio diversity of the area that had been instrumentalized by the Soviet pragmatic extractivism. Trying not to be yet another intellectual, who arrived to a periphery to teach the locals, an entire team of IZOLYATSIA worked on establishing horizontal connections, building on equality, empathy, care and mutual respect. Finally, at the beginning of 2022 the contract with the EU donors was signed and a new long-term project involving among other activities reconstruction of the House of Culture was about to be launched. The House of Culture lays in ruins now.”

Kateryna Filyuk is a curator and researcher, and currently serves as the curator at Izolyatsia. Platform for Cultural Initiatives in Kyiv. She is also a co-founder of 89books publishing house in Palermo. Filyuk is a founder and curator of Festival Ucraina. La terra di confine in Palermo (2022). In 2020-21 she was a Curatorial Board member of the Others Art Fair (Turin). Prior to joining Izolyatsia, she was the co-curator of the Festival of Young Ukrainian Artists at Mystetskyi Arsenal, Kyiv (2017). She has participated in several internationally renowned curatorial programs, including Young Curators Residency Programme at the Fondazione Sandretto Re Rebaudengo, Turin (2017); De Appel Curatorial Programme, Amsterdam (2015–2016); International Research Fellowship at the National Museum of Modern and Contemporary Art (MMCA), Seoul (2014); and Gwangju Biennale International Curator Course (2012). She was the catalogue managing editor and discussion platform coordinator for the First Kyiv International Biennale of Contemporary Art ARSENALE 2012. She holds an MA in philosophy from Odessa I.I. Mechnikov National University and since 2021 is a PhD student at the University of Palermo.

The Expert Talks titled “Curating the End-Game: Pain, Guilt and Empathy” are part of the evolving, multidimensional, across the borders activities, which the ICA – Sofia will hold in Sofia and in Prishtina as a contribution to the Wetern Balkans project of Manifest 14, Manifesta 14, the nomadic biennial of contemporary art which is held in Prishtina, Kosovo (July 22 – October 30, 2022). Loosely described as “visual talks”, these will engage theoretical, visual and critical voices, off and on-line contributions, panel discussions and exhibition displays by a multitude of contributors from the region and beyond.

The Manifesta 14 Western Balkans Project is co-funded by the European Union.