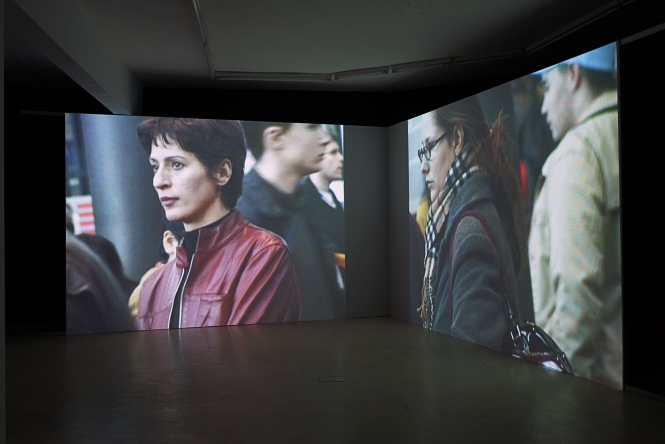 UNRENDERED is a two-channel video Installation (DVD, sound, 18’16’’ looped) that documents the ordinary everyday situation of individuals waiting at the “Meeting-Point” in the Zurich main train station. The images are projected onto two adjacent walls and prompt the visitor to study, compare, and analyze the behavior of the people waiting: extroverted scanning of the surroundings, introverted reading, just hanging around, nervously smoking… There is no communication between the “actors”. Hardly anybody seems to care about the high “meeting-potential” of the site. The set-up of the installation establishes interaction between the protagonists of the video images. The empty space between the two walls is filled with gazes and gestures as symbols and metaphors of communication. The transitory and uncontrolled situation of overcrowded, open public spaces is captured and translocated into the closed system of a laboratory-like setting, where the unredered, documentary material becomes an object of controlled observation. The juxtaposition of both spaces confronts and alters the qualities of the two completely different locations – different in terms of their urban setting, their architecture, their social function and their meaning. This project was realized in 2001 with the support of the “Zuger Kulturstiftung Landes & Gyr” and Egli Film & Video, Zurich and was presented at Manifesta 4, European Biennial of Contemporary Art, Frankfurt/Main, Germany, 2002. The author expresses gratitude to all those who have been filmed inadvertently in the process of realization of this project.