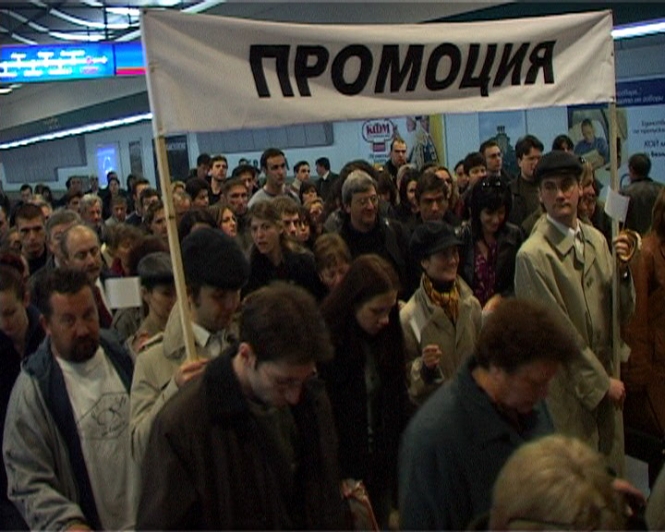 The project "From toward to here" is presented by X-tendo, an association for city’s research with the means of the art. We work for the individual in the most typical and critical of contemporary environments – the urban one. We treat the city as a changing system. We take into consideration the space, inhabitants and behaviour, which determine its structure – their function, characteristics, essence. We are interested in everyday behaviour, memory, habits, traces and signs. It is generally accepted that there are special times and spaces for art, while everyday life is what surrounds us and happens to us all the time. We use precisely everyday life as the material out of which we make an art product, which we place back in the common everyday reality. We suggest a possibility for everyone to recognise, rediscover and reconsider themselves in their individual existence in the urban space and its different realizations in memory. We participate in Visual seminar with our project From toward to here. The basic concepts which we use, are the city as a system of linked elements existing in symbiosis, as the habitat of human beings nowadays, and as a dynamic system, which is constructed by human beings, and which, in turn, conditions them. We also use the concept of memory by which we mean traces (lasting and transient) that remain in the urban environment. The project "From toward to here" is about movement in space and time. It is also about the energy which accumulates during an experience and the transportation of this experience to a different point in time (now), and about the site which unites historical moments. This is the energy of the memory which can manipulate our notions about aesthetic values and behaviour models, and which can do this at specific places in the city we inhabit. In our fast-changing environment familiar values undergo dynamic processes of change and become unfamiliar to our pace of life. In our aspiration for change and in our attempt to lean on something reliable, which we have not yet experienced so that we could make it ours, there emerges a sense of nostalgia for images from the past. Our project aims at approaching images from the past in the context of memories and to evoke an atmosphere saturated with the sense of happening and with the presence of familiar faces from the past. To this end we have collected visual material which is the result of the tasks we have set ourselves in order to define lasting and transient memory in the context of urban environment. We are trying to provide answers to several questions. Does the city have memory? How does the city recollect its own past? How do we have memories of the city and of ourselves? Where and how do we find these traces of memory? We carried out two project activities which involved working on transient traces of memory in the urban environment. By transient we mean all traces of human behaviour which have no lasting effect on the space where they have been identified. General multiplicities have also been found which are related to the lasting traces of memory in the urban environment. We have agreed on a shared understanding of the meaning of ‘lasting’ and we use it for signs that bear Sofia’s history over a longer period of time (monuments, buildings, as well as notices, inscriptions, etc. which refer to the past of a place even though the functions of this place are now changed). Human behaviour or, to be more precise, the different types of human behaviour also have a memory of their own – this memory is imprinted on the city, but the city is imprinted on this memory as well. In this sense we are interested in the dialectic relation between the behavioural and the aesthetic. We take into consideration all levels of city life – social, cultural, political as well as what pertains to the mundane and everyday activities of the city. In our studies we evoke a visual and behavioural environment from different periods which involves interpreting signs from the past which have remained in the present, archives about past events and old plans that have been carried out eventually. From the material that we gathered we made a project which is behavioural and visual, and which we exposed at the point of intersection of lasting and transient traces of memory in urban space. Our aim is to place the observers in an atmosphere from the distant or more recent past, to ‘stop the time’ for a while and to break the everyday rhythm, to make urban memory more visible.