How to Become the Best Artist in the World 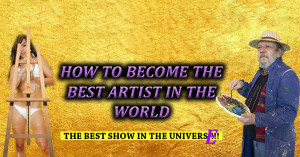 In 2020, Mitch Brezounek made his film "How to Become the Best Artist in the World". The film is a feature film, not only because of the fictional plot and the incarnations of the characters, but also because of the play with the formats of modern marketing, in which religious or financial gurus offer miraculous solutions to the complexity of the contemporary world. In the film, the main character - the master of painting Doug promises to transform any viewer into the best artist in the world in just ten lessons. The ten lessons concern important choices in the art world: the medium, the idea, the themes, the colors, the dress code, the risk, the market, the Internet, and the woman. All these important choices are visually staged with a large number of weird objects, some of which play the role of works of art, while others are just inventory. These objects have a dual identity. On the one hand, they are images evoked by the artist's imagination for screen life. On the other - according to their materiality and closeness to the original oeuvre of the author, we can safely consider them as pieces of art in-themselves. This play of reflections, doubles and mirages is the subject of the exhibition, which, in а deceivingly easy-going way between ridicule and absurdity, actually asks very painful questions about the system of art in the global market of affect and fierce competition for visibility. A system, in itself, saturated with paradoxes, reflections and doubles. A system in which criticism, rebellion and radical gestures coexist (and sometimes coincide) with market tricks, schemes, and marketing phantasmagorias.

In the course of the exhibition we will present a new limited edition of Mitch Brezunek's film "How to Become the Best Artist in the World" in the surprising (well-forgotten) format of a VHS video cassette in an originally designed box and artist's booklet.