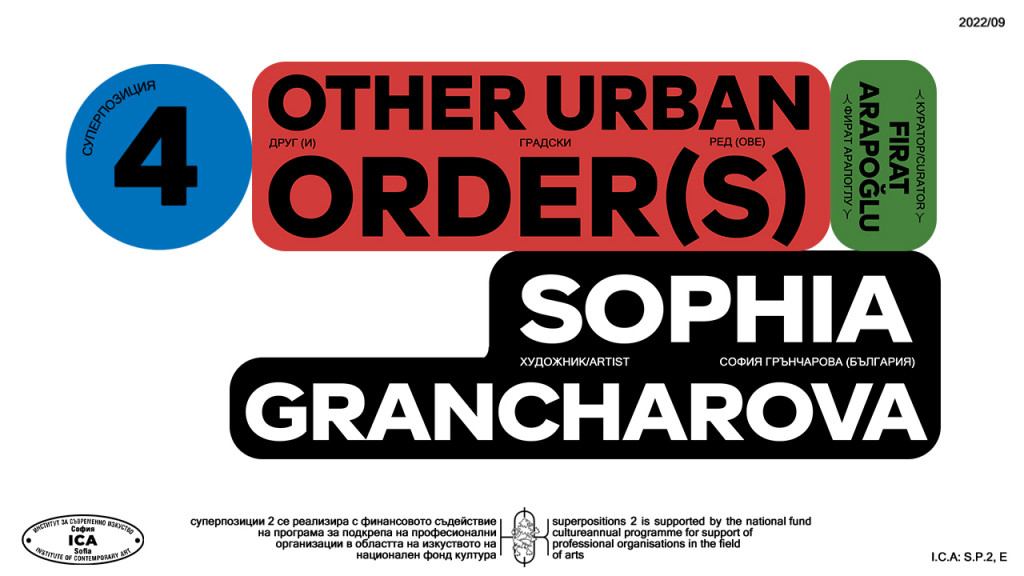 The modern city is a community city which is organized around capital and shaped by capital accumulation and the movement it creates. In contemporary society, the complex division of labor that emerges from cognitive and material transformations shows an intricate structure that includes changing social and spatial forms. Sophia Grancharova confronts the specificity of the modern urban context by oscillating at the boundaries between architecture, city, and the body. She is referring to the historical development of urban areas in terms of the individual and social aspects, as well as the transformations created by modes of production.

The focal point is the city of Sofia, where she was born and raised. Like many cities in the region, Sofia is fairly chaotic regarding architecture and urban planning. As in other big cities, there are areas where people are concentrated and this brings about different spatial forms. While approaching the city through the relationship between architecture and body, the artist makes us approach the urban context through bodily experience. While doing this, she considers architecture as a human body by using the relationship between fabric and body.

The production relations are the driving force behind the spatial and social organization in urban areas. We can only explain cultural forms and social consequences if we can understand this. Throughout history, states have produced cultural and aesthetic ideals regarding the settlement patterns and the organization of urban space following their roles and forms in the historical process. Walter Benjamin explored the rationalization and commodification of urban space, focusing on the passages of Paris and its life in the nineteenth-century. He compiled a tremendous insight into the sensory experiences of Parisian street life. Later theorists such as Henri Lefebvre and David Harvey developed a culturally rich and dynamic reading of the economic, political, and aesthetic aspects of Benjamin's notion on the diffusion of new forms of consumption within the urban space.

Sophia Grancharova, on the other hand, reads the radical changes in the city like a geographer and sociologist while explaining as an individual the transformations that have taken place in its history. Taking the analysis of capital accumulation and circulation as a starting point, she created a series of calculations of spatiality and scale. She examines the city in terms of concentrations and flows of people, commodities, capital, means of production, and knowledge. Because of the stability within specific urban configurations, the contradictions, tensions, and dynamics manifested there are essential for explaining the city. In her Sofia walks the artist records the textures of the streets and the facades of buildings. She sometimes appears as a flâneuse like George Sand, Frances Trollope, Kate Chopin, and Djuna Barnes, while reading life and the streets. For Sophia, Sofia is a place of constant change and transience. For her walking is an action that triggers creative thinking, helps her plan for her designs, and the construction of her exhibitions. In addition, some of her walks can be described as a process of drifting by including the luck factor. Her constructed wanderings have created new zones to explore, new places to live in, and new paths to follow; hopefully, the wanderings will lead to the conscious and collective construction of a new civilization. Thus Sophia Grancharova transforms the bourgeois city into a playful city.

Recording the architectural elements, she encounters the technique of frottage; the artist points not only to sight but also to the sense of touch. The textures on the cloths that she has created with silicone thus point to the sense of observation – the seen but not bought, in Benjamin's passages. On the other hand, the artist says that while the central point of the city is considered to be the head of a human body, on a theoretical basis, many modern cities (including Sofia to an extent), have grown without a plan. Such cities and their urban order are like a headless body.

Sophia Grancharova prefers to observe the city from below rather than from above, thus confirming Michel de Certeau’s words: “However, on the contrary, the place where the daily practitioners of the city life are is below the threshold where visibility disappears. As the first forms of this experience, they are walkers, that is, Wandersämnner, with their bodies that match the rhythm of the thin and thick letters of a city ‘text’ that they cannot read but write.” So, Sophia Grancharova, as a flâneuse, points to a never-ending cycle that can change by chance and mixes with the city crowds as a wandering, idle, and vagabond figure in modern urban life. The result is “Other Urban Order(s).”

'OTHER URBAN ORDER(S)' is the fourth exhibition in the year-long program Superpositions 2 / Entanglement, 2022 of the Institute of Contemporary Art-Sofia. The program includes six exhibitions, each one a collaboration between an artist and a curator, along with a cycle of educational events and discussions. All these examine the entanglement of contemporary art with politics, science and technology, popular culture, gender and social movements, ecology and migration.

The program is supported by the National Fund “Culture” / The Annual Program for Support of Professional Organizations in the Field of Arts and the Singer-Zahariev Foundation.

Sophia Grancharova (b. Sofia, Bulgaria) studied fine arts in France and Belgium. She has participated in many group exhibitions, educational initiatives, and her own curatorial projects. In 2021 she had her third solo exhibition, “If you look closely, things can fall apart” at the Sofia City Art Gallery. Member of the Institute of Contemporary Art-Sofia and the Justice for All Initiative. Her work comes in the form of limited editions of artist’s books, performances, photography, collage, installations and site-specific interventions.

Firat Arapoğlu (Istanbul, Turkey) is an Art Historian (PhD), Art Critic & Independent Curator. He is Assistant Professor in the Faculty for Economic, Administrative and Social Sciences, Department of Social Sciences, Altinbas University, Istanbul. He has curated numerous exhibitions in Turkey and abroad, most recently: “Future Unforgettable”, Krassimir Terziev (2019, Versus Art Projects, Istanbul); “The Fifth Agreement”, Esra Satiroglu (2019, Summart, Istanbul), and the “Simbart One-Day” solo show programs. He co-curated the 3rd International Canakkale Biennale and 3rd and 4th International Mardin Biennales in Turkey. He has published essays in national and international art magazines such as Sanat Dünyamız, Genç Sanat, Art-Ist Modern & Actual, ICE, ARTAM, Art Unlimited, Critical Culture, RH+, Istanbul Art News and Flash Art. He has also published in national newspapers such as Birgün, Cumhuriyet and SOL. He has taken part in national and international symposiums about art and art education, and has been lecturing in the Istanbul Modern Art Museum, Moda Sahnesi, Narmanli Sanat, and Istanbul Bilgi University. He was the 2018-2020 President of AICA-Turkey (International Association of Art Critics-Turkey).