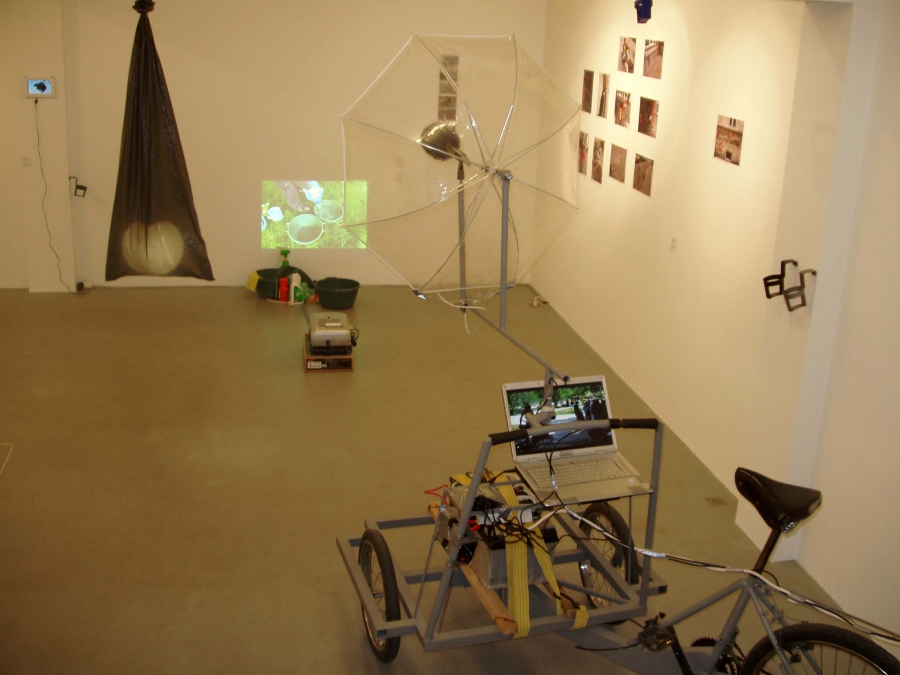 Low budget and highly efficient artistic interventions in public space – that is the idea behind the project, which is presented in the ICA-Sofia Gallery. Five young artists from Bulgaria are showing photographic, video and sound documentation of their interventions in the urban space of the cities of Sofia and Dobrich from the summer of 2011. Amusing, ironic, critical, nostalgic, and poetic – these artistic interventions are concentrating on the dysfunctional aspects of the "wild" neoliberal space that we inhabit during the last 20 years. They are asking the question: is there space left for the individual human being with his/her everyday life joys and concerns?

Vikenti Komitski is correcting spelling mistakes in nationalistic graffiti on buildings in Sofia. On top of that he is taking care of those people working on the streets of the city by installing coffee cup holders on doors, drainpipes, telephone booths and railings.

Veronika Tzekova is concerned with the lost sense of cosines, safety and good neighborhood relations. The spaces for children to play in the city have drastically disappeared and so the plays are disappearing as well. The artist is reconstructing the Chinese jump rope, the Hopscotch and the neighborhood football – free and joyous games that are born out of human relations while building new ones.

Kiril Kuzmanov has constructed a complex machine involving a bicycle, an umbrella, a loudspeaker, etc. He is using this weird looking device to eavesdrop on the life in the streets of Sofia. Then he is broadcasting back the recorded sound with a three seconds delay. No one is protected from feeling stuck in between the public and the private sphere in the modern city – that is the ironical but rather valid "message" of this work.

Miroslav Hristov and the Plus Group are making the point that the urban environment needs to take a break from the human (ours!) violence. They put "Do Not Disturb!" labels (familiar from hotels) next to animate (people, reading newspapers on benches) as well as inanimate objects (cars abandoned everywhere). They also furnish various monuments with sleeping pillows – precisely where the city is sleeping instead of debating its past and present.

Samuil Stoyanov is "dressing" the street lamps in the center of his home town Dobrich with black plastic bags usually used for garbage disposal. The artist is commenting on the already habitual absence of the human aspect in the urban environment, on the lack of beauty and rational simplicity there – the kind of simplicity through which the street lamps become magically transformed at either night or day...
- - - - -
This is a project by < rotor > association for contemporary art, Graz; University of J. E. Purkyne, Usti nad Labem; [BLOK] – Local base for cultural refreshment, Zagreb; The Blue House Foundation, Amsterdam; Institute of Contemporary Art, Sofia and NABA – New Academy of Fine Arts, Milano.

The thematic of this project is a natural continuation of the ICA–Sofia activities in relation to the Visual Seminar project, organized between 2003 and 2006. It is dealing with the issues of gentrification (visual and otherwise); with exploring the stages of neo-capitalism and the construction of a new urban class of consumers through visual and other material markers; with the shifting role of the artists and the intellectual in the public debate; with exploring the urban specifics of the existence of (usually) invisible and underprivileged minorities.

With the support of the Culture Programme of the European Union.