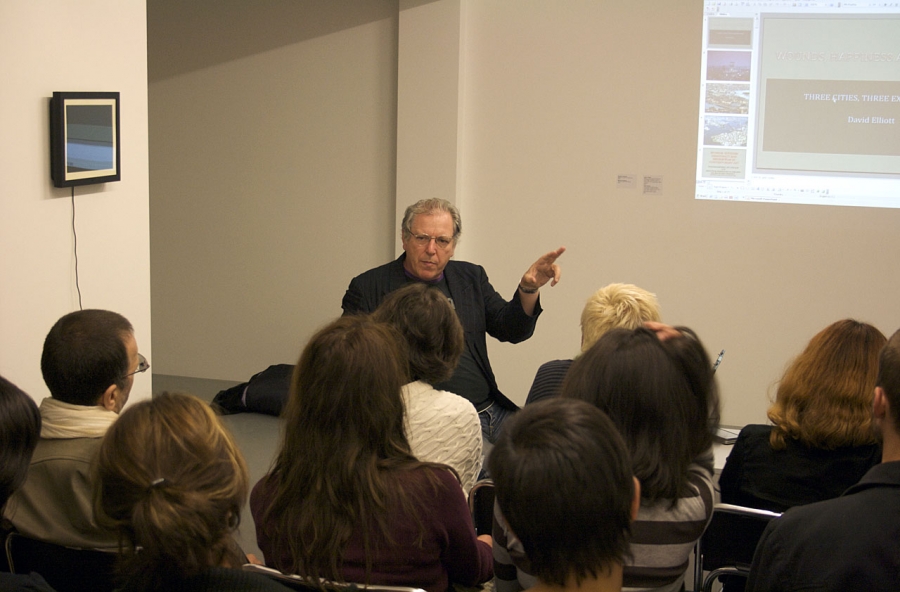 David Elliott, one of the top museum directors and exhibition curators of contemporary art in the world, presents his current and past projects .

During the last decades he has worked consistently on braking up the monopoly of the large art centers by introducing art and artists from what used to be called the “periphery” as well as by introducing new themes and approaches to the way contemporary art practices are presented in museums and biennials. Known as a cultural historian as well as a curator and writer, David Elliott has interests in contemporary and modern art, Russian avant-garde art and the cultures of Central and Eastern Europe, Asia and the non-western world from the late 19th c. Starting with the early 1980s, he formulated and realized a number of pioneering exhibitions in one of the first programs to integrate non-western culture with contemporary art. He has published a large number of books, articles and catalogues on these subjects. One of his persistent interests in writing is the present-day role and function of the museums of contemporary art.

In the Bulgarian art scene the most well-known pioneering exhibition project that David Elliott worked on (together with Bojana Pejic and Iris Mueller-Westermann) is the exhibition “After the Wall: art and culture in post-Communist Europe” (1999, Stockholm; 2000 Budapest, Berlin), which was dedicated the 10th anniversary since the Fall of the Berlin Wall. David Elliott collaborated with several Bulgarian artists and writers on this show, which to this date remains one of the very rare Western views on the processes of transformation in Europe after 1989.
The talk in Sofia will concentrate on three of the most important exhibitions projects of David Elliott over the last 10 years:
- “Wounds: between democracy and redemption in contemporary art”, Stockholm 1998;
- “Happiness: a survival guide for art and life”, Tokyo 2003;
- “The Beauty of Distance. Songs of Survival in a Precarious Age”, Sydney 2010.
The last show David Elliott’s current project - the 17th Biennale of Sydney, one of the oldest and most important surveys of contemporary art in the world.
David Elliott was Director of the Museum of Modern Art in Oxford, England (1976-96) and Director of Moderna Museet in Stockholm, Sweden (1996-2001). He is the founding Director of the Mori Art Museum in Tokyo, Japan (2001-2006) and in 2007 he was the first Director of Istanbul Modern, Turkey. From 1998-2004, he was President of CIMAM (The International Committee of ICOM for Museums and Collections of Modern Art). In 2008 he was the Rudolf Arnheim Guest Professor of Art History at Humboldt University, Berlin. Currently he is the Artistic Director of the 17th Biennale of Sydney, which will take place from May 12th – August 1st, 2010 in Sydney, Australia. http://www.biennaleofsydney.com.au/