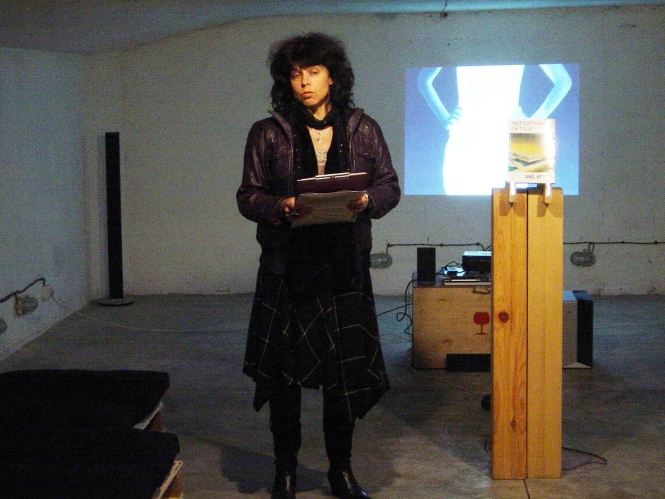 For 2009 the award is the book “Institutional Critique and After” (papers from the SoCCAS Symposia in 2005; Paperback Edition, JRP/Ringier 2006; Authors: Andrea Fraser, Isabelle Graw, Jens Hoffmann, Renee Green, Hans Haacke, Monica Bonvicini, Mike Kelley, John Searle, The Yes Men and John C. Welchman, Editor) and it is awarded to the author (or authors) of the Internet blog “Nothing Personal”.

The Essential Reading for Art Writers Award, an initiative of the Institute of Contemporary Art-Sofia, will be awarded this year for the third time. This annual award is conceived as a tool of encouragement for those who write actively about contemporary art; for those who through their activities push the development of critical thinking; for those upholding the sense of responsibility and ethics in the public debate thus contributing to the formation of art audiences, to the expansion of the understanding of art, to the reinforcement of its stand and position in the life of society. Within the art scene this award is meant to raise the symbolic status of writing on contemporary art. The material expression of the award is a book, which aims to emphasize the fact that access to professional literature on contemporary art is still a problem in Bulgaria.

For the first time since the inception of the award the decision on the winner was not taken unanimously by the members of the ICA-Sofia due to some serious objections to anonymity in the post-totalitarian context. After protracted and heated debate, the award was finally given to the author (or authors) of the blog “Nothing Personal” for the sharp yet motivated critical texts, for triggering a debate on the role of art criticism in the country, for the engaging experiment with the new means for being present in the public space.
The award will be given at a special informal ceremony on Monday, April 12th 2010, at 7 pm in the space of The Fridge located at 122 Ovche Pole St. in Sofia.

Should the award winner be unable to attend and receive the award in person on April 12th, the award will be available for collecting by the winner in the space of The Fridge until the end of opening hours on April 15th 2010 after presentation of a password that will be provided via e-mail directly to the winner.