ICA-Sofia at The Book Coop

e-flux has been invited to develop a special project for the Kopfbau during Art Basel. The Kopfbau (head building) is the oldest building in the Messeplatz complex, slated for demolition later this year. In response to this invitation, e-flux developed a constellation of projects situated somewhere between exhibitions of art and the concrete forms of sociality encountered in everyday life. Conceived as an independent universe with its own bar, hotel, shops, admissions, and so forth, this project operates in parallel, and as the inverse to the neighboring art fair: operating during alternative hours and in surprising and often paradoxical ways, and ranging in scope from the educational to playfully predatory and mercantile. Its component parts draw on a wide circle of institutions, artists, curators, and writers who have been involved with various e-flux projects over the past several years and comprise seven discrete projects, including: 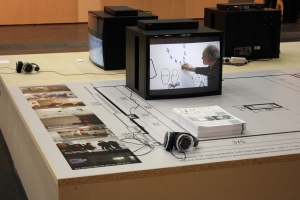 In the "Temporary Sales Zone" ICA–Sofia presents itself as an association formed by the collaboration of like-minded professionals in “Unmaking Dan” (2010), a video of a collective performance made by Kalin Serapionov. ICA–Sofia also showcases GastARTbeiter (2000) by Luchezar Boyadjiev, one of its founding members. This panoramic print navigates through the complex conditions of existence for the contemporary artist in Bulgaria – accepted as an artistic security and market commodity but only beyond the borders of his home country.